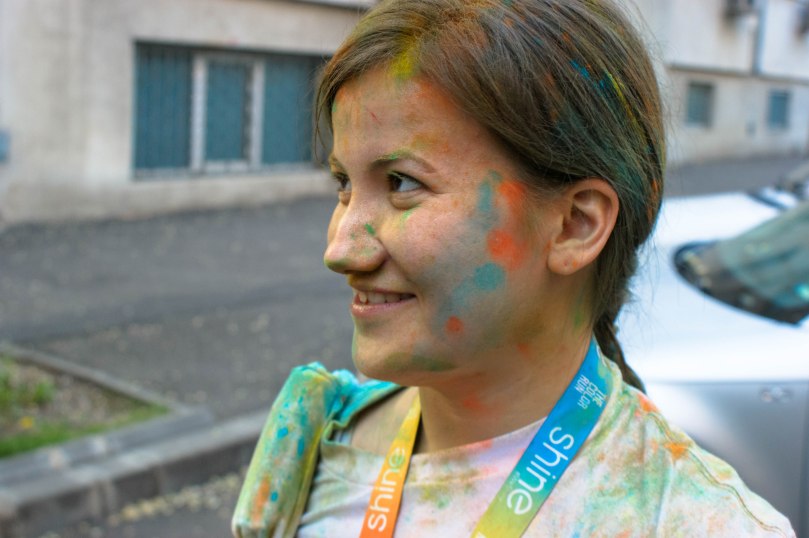 So this weekend I was lucky enough to take part in a fun event called The Color Run. For those of you who don’t know, The Color Run is a 5-km “race” in which, at every kilometer you get splashed in the face with colored paint (in the form of dust) – one color per each kilometer – a “race” which ends with a color burst and a party.

I use the term “race” loosely and in between quotation marks because there’s absolutely no pressure whatsoever for you to run those 5 km intensely. You can do anything you want: jump, do a cartwheel, walk, run – as long as you have fun. That’s the point of the whole event. Officially, you have an hour to finish those 5 km and I can assure you – as a person who does not run – it’s very doable. You can go at your own pace – the whole point is to finish. Upon finishing the race, you receive a medal and a bag of paint that you get to throw later, when all the people in the race have finished it and gather at the starting point. Then you get to throw that paint in the air and become even more full of color – literally. This year, there were 6500 people participating in this race and you can imagine the color cloud formed by all these people throwing their paint in the air at the same time.

There were 4 colors thrown at us at every km throughout the race: yellow, red, green and orange, and at the last km there was glitter. After the glitter shower, I felt like Edward from the Twilight movies XD

Everyone was all clean at first (see above), wearing the T-shirts provided for us for the event, but at the end, there was color everywhere. I didn’t even wear make-up because I knew there was no point. And I was right – by the end, I had paint everywhere – even in my mouth and ears 😀

I said before that I do not run – don’t get me wrong, I enjoy physical activities, just that running is not my thing. I turn all red and can barely breathe – all thanks to my deviated septum.

Aaanyway, in spite of that, I had a lot of fun and I actually finished the race – and no, not just by walking 😀 I would definitely do it again anytime! Just not today, though, I have the worst muscle soreness. 😀

It was quite easy to remove the paint from my hair and my skin. I won’t be washing the T-shirt – it’s my own personal trophy – nor the shoes – I actually love the way they look, splashed with color like that.

Have you guys done anything like this before? I can’t imagine anyone not having the least bit of fun doing this or anything that involves splashes of color and getting dirty and not caring about it – just like you did when you were a kid.

It was amazing and I felt more refreshed afterwards than if I would’ve slept all day. 10/10 would recommend.

3 thoughts on “The Color Run”